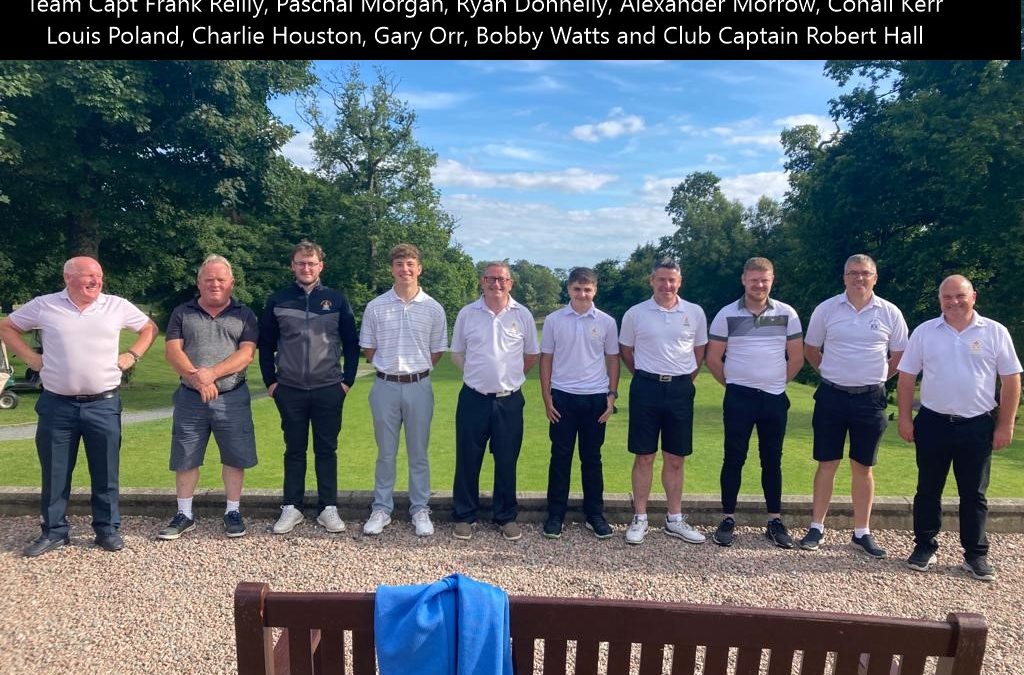 2022-07-31 Sam Rutherford clinch semi-final spot.
After the first leg of the quarter final against Loughgall away, the Sam Rutherford team captained by Frank Reilly found themselves 5 holes behind, however the home leg was played at Kilkeel today with a strong team selected to overturn the deficit.
First out was Charlie Houston and Louis Poland. After a defeat at Loughgall they were up for revenge in this game and delivered with a 7 up victory.
Conall Kerr and Alexander Morrow held it tight but went down by 2 holes in the end to leave the match all square overall.
Bobby Watts had a new partner in Ryan Donnelly and even though they were 2 down early on, wins with either birdies or pars at 13,14 & 15 saw them go 1 up. Another birdie at 17 saw them go to 2 and a final par gave them a massive 3 up victory. A feat which saw them play the back nine under par.
In the anchor pairing, Vice Captain Paschal Morgan (after his big day on Saturday) and Gary Orr kept the pressure on and with Paschal putting like a ‘demon’, delivered a 5 up win to leave an overall 8 hole victory for Kilkeel.
So well done to Frank and the boys who were involved in a tight match until the back nine when they moved up a gear to secure victory.
Next up in the semi-final is Killymoon (Cookstown) to be played by 28th August. With this win under their belts, the Mourne men have enough fire power to take it the whole way.